The Top 10 Poetry Posts Ever & More 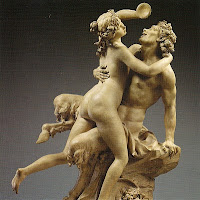 Surfing the Web recently, I stumbled across a rather presumptuous list called 100 Best Poetry Blogs.  What can I say?  I got big feet & fat fingers, so I can be clumsy.  Luckily, I caught myself before I fell headlong into my ceramic menagerie, a virtual bookcase of classy stuff.  (As the sample picture shows, it's erotica, not porn.)  Anyway, the, um, "horn" of my satyr saved, I gave the list the old once-over.
Well, well, well.  Hmm.  Interesting choices, interesting for substance in some cases & for sheer befuddlement in others.  For example, how does Poetry Hut top the list?  More like Poetry Huh?!
Ok, it's easy to criticize others--& as Homer reminds us--fun too.  Yes, Homer Simpson.  However, rather than waste time launching verbal kill shots at some crappy blogs, my energy would be better spent directing ridicule at the listmakers & list itself.  After all, the omission of my blog renders the list irrevocably absurd.
Yes, that would be rewarding, I'm sure, but more productive still would be my pointing you, dear reader, to posts on my blog that perhaps you in your busy days--which I understand completely, for every atom belonging to me yadda yadda yadda et cetera et cetera--may have all too regrettably overlooked.

Therefore, I've provided below a few links to some of my personal favorite blog entries.  I've not arranged them in any particular order, so feel free to click willy-nilly about.  Whatever floats your boat.  Once you've finished with your willy-nilly, however, I hope you'll find time to read my blog.

If you enjoy these--how could you not?--then maybe you'll like some blogs from earlier this year:

W: What Oliver Stone Didn't Tell You
How to Make The Divine Comedy Relevant to Today's Audiences
Going Ballistic
Emily Dickinson Post
Homer's Space Odyssey.  Also, The Iliad
Posted by Matt Morris at 6:35 PM No comments: Links to this post

Q: What Do Nabokov, O'Hara, Poole & Rimbaud Have in Common?

A: I recently read each poet!

In Poems & Problems, Vladimir Nabokov's playfulness often results in great lines, if not great poems. Take, for instance, the following from “Snow”:

Whenever I’m falling asleep
I cannot help think:
Maybe you will find a moment to visit me,
My warmly muffled up, clumsy childhood.

Generally speaking, I prefer his translated Russian poems to his English verse; that said, “An Evening of Russian Poetry,” in which he fields questions from presumably American students, is two thumbs way up.  Higher, higher!

*         *          *
Many of the selections from Voice of the Poet are accompanied, as one may have guessed, with recordings of Frank O’Hara reading his poetry. In my early twenties when I discovered O’Hara (yes, in the same way Columbus discovered America) it changed my poetics dramatically. I began to see how material from my own life held enough significance to be part & parcel of my poems.  Furthermore, I learned that I didn’t need to stifle my sense of humor, which for better or worse, is a big part of my personality. Of course, O’Hara should have revised more, but as he says, in his own defense perhaps, in “Naphtha”:

*           *           *
Scott Poole (The Cheap Seats) is a bit of a minimalist, not in the creepy Robert Creeley sort of way, but he writes short poems with short words & short sentences to describe, in short, life in suburbia. His poetic sensibilities grant him the ability to write such lines as:

But as I crossed the river
the tombstones were not tombstones
but chimneys,
and houses all alike had grown beneath them.
It was not the death I had expected. (“The Crossing”)

I wish this collection had more like examples, but to make a long story short, The Cheap Seats keeps my interest, though only minimally.  Ha!

*           *           *
A Season in Hell and The Drunken Boat, by Arthur Rimbaud (trans. Louise Varese) signals a significant departure from First Blood & its many sequels. A Season in Hell poses the question of how many MIAs can a poet save, even if said poet is a berserk one-man-army with highly volatile verse strapped to his chest?  Stallone's never been this good. My favorite lines occur early in “The Drunken Boat,” in which the boat, like me, is only slightly tipsy:

Light as a cork I danced upon the waves,
Eternal rollers of the deep sunk dead . . . .
Posted by Matt Morris at 11:39 PM No comments: Links to this post

There at the stairhead, bearing
A bowl of lather, lifting

His big leafy arms to shave!
Slovenly as a tree that may

In tangled curls, dark & bared
For all in mid-morning air,

He, like a fool, greeted me:
Introibo ad altare Dei.
Posted by Matt Morris at 4:05 PM No comments: Links to this post