Behind the Music: The Making of Greatest Hits 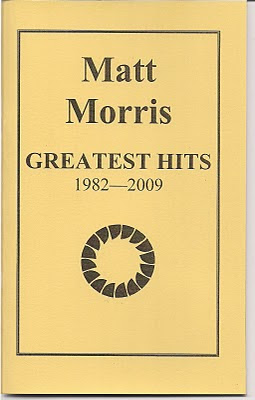 Yes, it's a glimpse behind the curtain--hey, perv, not that curtain! Now come here. Look--it's the cover of my latest chapbook. Sadly, a printing glitch has delayed its long-awaited December release. Well, that's the "cover" story. Now the inside scoop. This "setback" is part of the elaborate pre-publication hype meant to garner media attention. It's just the kind of publicity stunt, like Paul McCartney's (Here's another clue . . . the walrus was Paul) rumored death due to a lethal saccharine overdose back in the '60s, sure to drive sales. Pretty smart, huh?
Posted by Matt Morris at 5:14 AM No comments: Links to this post

What Place Is This? Where Are We Now?

Let this title--lines from Carl Sandburg's "Grass"--serve as an epigraph.

I can't help but recall the wisdom Vizzini imparts to the disguised Westley in The Princess Bride: "You fool! You fell victim to one of the classic blunders--the most famous of which is 'Never get involved in a land war in Asia.'"

Although Vizzini's subsequent insight ("Never go against a Sicilian with death on the line") fortunately proves false, history supports his former assertion.

The decision to escalate U.S. military involvement in Afghanistan is attributed obstensibly to fighting terrorism, replete with invocations of 9/11 & the continued search for Osama bin Laden.

If true, then why is our government reportedly working with the Taliban? Why help keep a corrupt government in power with our resources, our lives?

I'm not anti-Obama. I opposed Bush's invasion of Afghanistan & Iraq from the very start--& lest we forget, let's not gloss over the fact that our troops are still in Iraq, despite the president's campaign pledge to bring them home.

I reject the administration's hawking further involvement in Afghanistan as fighting the good war. No war is good. Some may prove necessary, but this one isn't being fought from necessity, but (it would seem) for political expediency.

Ah, but alas, this is a poetry blog, so here's a shortened version of Kenneth Koch's "The Pleasure of Peace" for your perusal & well, yes, pleasure.

Comments?
Posted by Matt Morris at 11:42 AM No comments: Links to this post