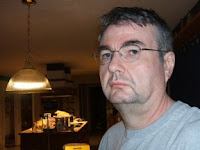 This dark photo shows me hiding in my own house after the bad haircut I got last week. I told the stylist that I wanted a razor cut, rough & jagged, pointing with my index finger, poked out from under the striped protective cloth, at the straight razor I was referring to. Think of anime--that's how I want it to look. She nods & begins to shave the side of my head with an electric razor.

No! I shriek, but too late. I say again what I want. She tells me that she'd never use the straightedge on my hair because it would look jagged--which, I remind her, is what I want, is what I'm sporting at the time, is how I've worn my hair for the past year.

The electric razor buzzes around my ears & the back of my scalp. I have to let her do this now because otherwise one side will be shorter than the other. When she starts to cut the top, I implore her not to use the electric, but the straight razor.

Again she refuses, opts instead for scissors, & immediately clips off a huge hunk of my hair, leaving a noticeable gap, which, blushing, she tries brushing extraneous strands at awkward angles to cover.

"I didn't do it," she says, surreptitiously trying to coax my hair into a contorted comb-over.

"You didn't do it?" I say. "Did my hair spontaneously fall out while I was sitting here?"

"You have a receding hairline, sir," she fairly hisses.

Maybe it's the Bush administration's effect on society that causes her, standing scissors in hand behind the barber chair, to deny responsibility for the missing hunk of hair. Jesus, how are we ever gonna get out of Iraq?
Posted by Matt Morris at 9:38 PM 2 comments: Links to this post