Poems at an Exhibition 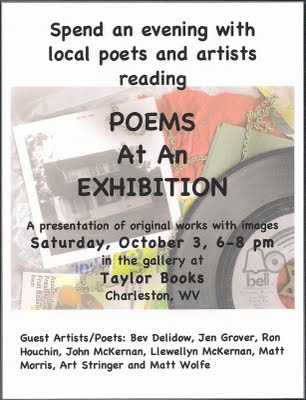 Posted by Matt Morris at 1:29 PM No comments: Links to this post

On Sunday, I played Brett Favre--no, not in fantasy football, but the drinking game! You know the rules: every time announcers mention Brett Favre, you gotta swill your favorite legal beverage. This week, in light of Tila Tequila being strangled by Shawn Merriman--allegedly--I went totally Mezcal while tuned to the Vikings-Browns game (I'm a Cleveland fan, so kick me again). For a taste of how my Sunday went, here's a sample from that silver-tongued football analyst Brian Billick:

I passed out minutes into the 1st quarter, which at least spared me the thumping the Browns took in the 2nd half. If you're not a sports fan, you may want to play the death panel drinking game instead. Sheesh, all this news about death panels in which, every five years once you reach 65, you have to meet with a government agent who'll decide whether you live or die--how can anyone believe crap like that? Have you ever tried to contact a government agent? Good luck! Let me know when you get through.

I'm all for universal health care, particularly the single-payer option, which the powers-that-be say isn't an option. We wouldn't want to stop making insurance companies rich--er, richer, would we? If not insurance companies, who'd make substantial donations to our representatives' political campaigns? Such contributions allow these corporations to extort control--I mean, exert control--over Congress. In fact, if the public option is eliminated & the individual mandate is invoked, the only ones who'll profit from the current health care reform are insurance companies--& politicians.

I wish there were a mandate that said anyone who didn't buy my Greatest Hits collection (forthcoming from Pudding House Publications) would be fined. Instead of 10 bucks, the current price, how about 100 bucks? Don't read, don't "get" poetry? Tough titty. I don't "get" what my insurance agent knows about heart attacks, but I don't want to have one when I "get" fined for not buying his product. Ultimately, that's what insurance policies are: a product, not unlike the empty boxes you see Progressive hawking in its auto insurance ads, sold for profit.

Speaking of policies, the same company that denied your claims before the mandate will undoubtedly deny your claims afterward as a matter of policy. How's that for a kicker?

You know what? Screw it. I not only want death panels, I want death squads. I want Josef F'n Stalin reincarnated to oversee them. Ah, Stalin! Vladimir Lenin dubbed him ruthless. Yes, the same Lenin who organized the Russian revolution, who shrugged off the execution of Nicholas & his family, called Stalin ruthless. That's like Dick Cheney saying someone is "cold." As for me, I know who's quarterbacking my death squad!

I may sound angry, but listen, once the statute of limitations has elapsed, I'll tell you an hilarious story about [RETRACTED] and a minivan of monks. Until then, how about a poem from my forthcoming Greatest Hits collection? Nah, better not. If Glenn Beck knows anything (he doesn't), that's creeping socialism. If you believe in America, you'll buy my book.

Or die.
Posted by Matt Morris at 12:31 PM No comments: Links to this post