I've gotten used to popular comedians "recycling" my comedy bits in their routines. I bet you didn't know, for instance, that George Carlin based his famous "7 Words You Can Never Say on Television" on an improvisation I performed at recess during the 3rd grade. It's true my initial performance lacked many of the sophisticated nuances that Carlin employed, but then again, he didn't shout his from an out-of-control merry-go-round spinning a zillion miles an hour while trying not to hurl.

Of course, Carlin would never have heard about my performance had Judy Palmer, her eyes blue as my shtik, her hair sheer comedy gold, not ratted me out to Mrs. Cooley, who, despite her name, wasn't "cool" at all. Mrs. un-Cooley, in turn, told the principal about my little thing--hey, I was only 8 years old!--who shared snippets, completely out of context, with my parents who repeated it ad nauseum to me that evening along with a rather vociferous critique.

Before long, it seemed everyone had heard about my obscenity-laced ad lib & the next thing I knew, there was Carlin reaping the rewards for the bit that got my ass busted. I felt a little like Lenny Bruce, I'll admit, but that's the nature of the comic beast. Indeed, stealing jokes can be be traced as far back as the dawn of the Paleogene, where a young rodent-sized mammal, Milton Berle (remembered these days, if at all, not for his wit, but for his mammoth dong) devoured Henny Youngman & his young for a one-liner about manipulative, overbearing mothers-in-law.

Today, when someone rips off one of my jokes, I take it as a compliment, as further affirmation that I know funny. However, the other evening while watching The Colbert Report interview with poet Paul Muldoon, I executed a well-timed spit-take that would have made Danny Thomas proud when Colbert alluded to Shakespeare's 18th sonnet in a rather silly discussion about metaphor. I had recently written a parody of that very same sonnet & feared some less talented poet--perhaps one of the poetasters who use my name--would "borrow" the idea & write some half-assed poem.

To be proactive, I've decided to post my parody below in order to establish a clear copyright date. I doubt the poem's in its final draft--I've not settled on a title either, so please share any ideas you may have--but if I understand copyright law, I can claim the idea as well as the language as my intellectual property because "anti-intellectual property" just sounds messed up.

If I were to compare you
to a summer's day, it wouldn't be
the 4th; however much
I enjoy fireworks kissing

the sky like Hendrix, vintage
Stratocaster ablaze, it isn't patri-
otism I feel for you. You're
not a summer solstice sun 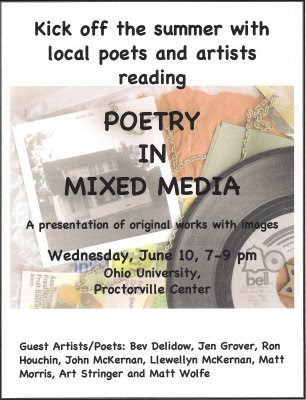 Posted by Matt Morris at 8:28 PM No comments: Links to this post