I’m sleeping with my hand
between the cream
pages of Louise Glück’s
Descending Figure, Mom’s ghost
banging on the other side
,of the door, telling me to get up
umbilical cord knotted
at either end to an empty soup can, her
rasp resonating across the murky
void of whatever is & isn’t
dream, where I’m falling

through the inverted bowl of sky
dumping its soggy flakes
on a red rooftop two blocks
from the tracks. Whenever
a train passes, it shakes
the faded cowboy sheets wound
around me, a comic
mummy, shamefully hugging
,a stuffed dog. G.I. Joe, Creepy Crawlers
spare bike parts & the like litter
the floor. A model sits on my chest

of drawers–a funny car dragster, Ed
,Big Daddy" Roth’s Rat Fink"
the rotund rodent’s candy apple
tongue extended, metallic blue claw
clutching the oversized stick’s
eight ball. I don’t understand
,exactly how I wound up here
but I’m quick to give up
,donkey’s years of memories
so nobody screamed
naked on the lawn, nobody
'scared the tits off the neighbors
yak topiary & nobody died. Mom carries
on like I’m late for the big test. Once
out of bed, I can’t go back. I want
nothing more than plastic soldiers
with missing extremities to stand up
plead for sleep. But my mouth won’t &
.work & the dead don’t listen
Matt Morris--
"Chimera" first appeared in Hunger Mountain & subsequently in Walking in Chicago with a Suitcase in My Hand.
Posted by Matt Morris at 1:12 PM No comments:

bush, watching, listening
for the sake of national
security. For
you might be a terrorist.
We might all be terrorists.

[Note: "The Giraffe" originally appeared in Rose Red Review (sadly, its site's no longer up), where it was nominated for Best of the Net. The poem also appears in my 2nd full-length collection, Walking in Chicago with a Suitcase in My Hand, published by Knut House Press (also, sadly, now defunct).]

Posted by Matt Morris at 7:54 PM No comments:

I'm also happy to see "Wrong Side," another new poem, in Hinchas de Poesía No. 25.

Many thanks to the editors & staffs of both magazines.

Posted by Matt Morris at 2:31 PM No comments:

I'm happy to see "The Jockeys" in 8 Poems.  Many thanks to all involved.

I'm pleased to have a couple poems ("Cultural Exchange" & "Looney Tunes") in the Spring/Summer 2020 issue of Crab Creek Review.  If you can spare the cash, why not buy a copy?

Many thanks to all! 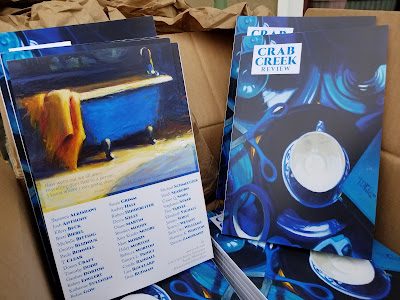 Posted by Matt Morris at 6:15 PM No comments:

Not only Covid-19, but another pandemic is crippling America these days.  Many Democrats, often referred to as “liberals,” even if only by themselves or MSNBC, applying the label liberally & inaccurately, suffer from Drumpf Derangement Syndrome, a thinking disorder brought on by media-induced hatred in which the afflicted become every bit as chowderheaded as the commander-in-cheese.  Reduced to believing Vladimir Putin is a cartoonishly evil supervillain covertly controlling the world, these drooling, mindless souls embrace—literally, in the case of Ellen DeGeneres or Michelle Obama—George W. Bush.  Yes, that silver-tongued Cicero of our time who started us down the road to ruin of preemptive wars, torture, indefinite detention, & the erosion of rights in general, Dubya, "the decider," is now dubbed a “real president.”

Often mentioned (perhaps pictured in a tan suit) alongside Bush as a "real president" is every Democrat’s all-time fave, Barack Obama. Not only was he the first African-American president, but his administration was also historic in regards to the number of people he deported, the frequency of his use of the Espionage Act to prosecute whistleblowers, & the expansion of drilling & fracking all over the world. The candidate of “hope & change” lived up to his promises as by changing the definition of “change” to mean codifying the horrific policies of the previous administration & “hope” to mean fuck off.  For instance, Obama expanded & extended the Patriot Act, illegal surveillance, & drone attacks; made Bush’s tax cuts for the rich permanent while cutting Pell Grants, welfare, food stamps, & in essence, Social Security; legalized killing American citizens without a trial, striking down habeas corpus; played a part, directly & indirectly, in undermining & usurping democratically elected governments to place right-wingers/fascists/neo-Nazis in power; & so on & on & yawn.  Definitely a “real president,” he accrued such an extensive list of “accomplishments” that it exceeds even the virtually unlimited space of this blog, though I probably should mention for the sake of irony the Affordable Care Act, which was the creation, in his own words, of a “marketplace for healthcare.”  Also in regards to irony, he won the Nobel Peace Prize.

Always eager to garner myself some sweet “liberal” cred, I want to remind amnesiac “progressives” of another “real president” to wrap what remains of their brains around:  Richard M. Nixon.  OK, I know he’s way too much of a “lefty” for today’s political arena, what with how he, having failed like those administrations before him to bomb Southeast Asia into oblivion, ended the illegal & immoral Vietnam War, & helped form, while opposing it bitterly—which was, truth be told, pretty much his usual disposition—the toothless & duplicitous EPA.  Nevertheless, the ol’ Dickster was a true trailblazer in surveillance & spying on political enemies, though his deeds, by comparison, may seem quaint to today’s jaded voters.

Call me a dreamer, but I believe some who call themselves liberals have hidden inside the core of progressive principles, but from naivete, ignorance, or sheer laziness accept the fallback narrative that corporate media sell us that Democrats are liberal & Republicans are conservative.  However, it doesn’t take much investigation before realizing that both parties serve the interests of the same corporate masters, not their constituents, & as a result differ substantively less than they or the press would lead you to believe.

Don’t be fooled by partisan noisemakers.  The question of who you’re voting for is a trick question. Now is the time for alternative parties to make the voice of the people known.  End the duopoly.  Support alternative candidates.

Duplicity in the Duopoly

There seem to be many misconceptions & misinformation/disinformation surrounding Tara Reade.  Many, like the terrible & terribly unfunny Bill Maher, want to know why she waited until now to make the allegations. To begin with, as recent cases show, it isn’t uncommon for victims to wait years to come forward.  Moreover, Reade did bring up this allegation previously but dropped it because of concerns for her daughter.  She brought it up again when Biden announced that he was running for president, even sending letters to Kamala Harris, who ignored her, & Elizabeth Warren, who sent her a form letter.  She reached out to mainstream media sources, which basically stonewalled her.  She contacted Times Up, which originally pledged its support, but upon realizing the charges were against Joe Biden, quickly backpedaled—not surprisingly, given its connection to Biden.
In most cases, especially when so much time has passed, there is no conclusive evidence of sexual assault, but there is corroboration from her brother, a friend, & a neighbor that Reade made these same accusations in the 1990s.  Her mother’s on-air phone call to Larry King 27 years ago, while not specific, implies some sort of harassment.  Also, Reade’s ex-husband’s legal response in their divorce alludes to claims of harassment on her job as causing issues in their relationship. While Biden staff members—hardly non-partisan, by the way—may not remember the specific charges, some have confirmed that Reade was abruptly demoted, though they don’t know why.

To say, as many Democratic partisans are wont to do, there has never been even a hint of sexual misconduct by Biden is patently false.  There are a number of women who have complained about Biden’s touching, kissing, sniffing, etc. making them feel extremely uncomfortable.  There is, in fact, a lot of video evidence of such behavior.  Unless the DNC’s expunged the entire internet, even a cursory search will most likely result in examples of Biden’s creepy, inappropriate behavior.

Others claim they’re suspicious because Reade has changed her story, but rather than change, she has added explicit details, none of which contradict her earlier allegations of sexual harassment.  As for erratic, suspicious behavior, Biden claimed that Reade’s files, if there were any, would be with the National Archives, which he asked the media to search, even though it wouldn’t find anything.  Ironically, Biden declined to give media access to his papers at the University of Delaware--now suddenly closed until several years after his public service is over--insisting it wouldn’t find anything & it would be a waste of time. As it turns out, the waste of time would have been searching the National Archives, which says it doesn’t keep those kinds of records, yet another example of Biden’s long, well-documented history of dishonesty.

While ultimately no one except Biden & Reade knows if the allegations are true, they certainly seem credible.  A rational observer would probably expect, if nothing else, those Democrats who say they support women’s rights would want to make their voices heard & pressure the DNC to nominate a more suitable candidate, one not accused of a sex crime.  Instead, these so-called progressives twist & turn with perverted pretzel logic to defend a candidate, who, even if the allegations are never substantiated, is deeply flawed, all the while accusing, in blind obedience & irony, those who defend Reade of being partisan.  One woman on Facebook went as far as calling Reade a “piece of shit broad” before making various erroneous claims in support of Biden, yet such statements aren’t partisan or sexist because, well, you know, Trump.

For the record, I don’t support Trump or Biden, who is, at best, a lateral move.  Both are corrupt, warmongering, corporatist scum, whose biggest disagreement is over party, not policy.  This election cycle illustrates once again, perhaps more starkly than ever, the existential need of growing strong alternative political parties.